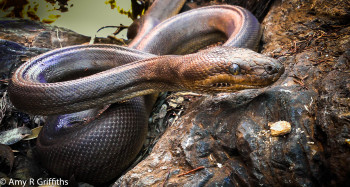 The Olive Python (Liasis olivaceus) is Australia’s SECOND LARGEST species of snake – the beautiful girl pictured here is relatively small for her kind! Two subspecies lie within the species – the relatively common ‘nominal’ subspecies (Liasis olivaceus olivaceus), whose population extends along northern Australia from the Kimberley to western parts of Qld, and its larger partner, the RARE Pilbara Olive (L. olivaceus barroni). Wow, you’re still reading! It gets better. This non-venomous snake is known among experienced handlers for its docile nature, being very reluctant to bite in the wild unless mistreated (though such trends in temperament are never without exception among animals, and a large python has the potential to cause serious damage with her multiple rows of back-curved teeth!)

If you went looking for a Pilbara Olive, you would have to start in the particular patch of Pilbara desert in which the species is supported. If you were exceptionally lucky, several nights of slow driving along bush roads may eventually reward you with a roaming male, as he crosses a road at night in search of a sedentary female. Otherwise, you’re in for a serious search on foot! To find a settled snake you must trek through kilometers of the seemingly endless spiny Spinifex, investigating every cranny of the rolling hills, until you eventually find one of the few gorges or escarpments that are worthy enough to form a refuge for one of these wonderful animals. In the dry season, it is not uncommon to find one crammed into the tiny remnants of a rock pool or river bed puddle, with only its very nose-tip protruding from the surface – almost invisible. The snake, perfectly still, will be ready to launch at almost any thirsty creature that dares approach the water for a drink. They will easily tackle prey as large as a Rock Wallaby (about two thirds the size of a Grey Kangaroo). In fact, there is at least one instance of an Olive attacking and consuming a pet dog, namely a 5.8 kg, 3 yr old maltese terrier-cross Bindi; the lively little canine met her demise in her own back yard one day, much to the satiation of one particular python.

I have personally only been acquainted with two Pilbara Olive Pythons, the most recent pictured above; and both have created lasting memories of pure joy for me. What a thing to cuddle and photograph!! May you too meet one one day. Stay Wild!

Pilbara Olive and I