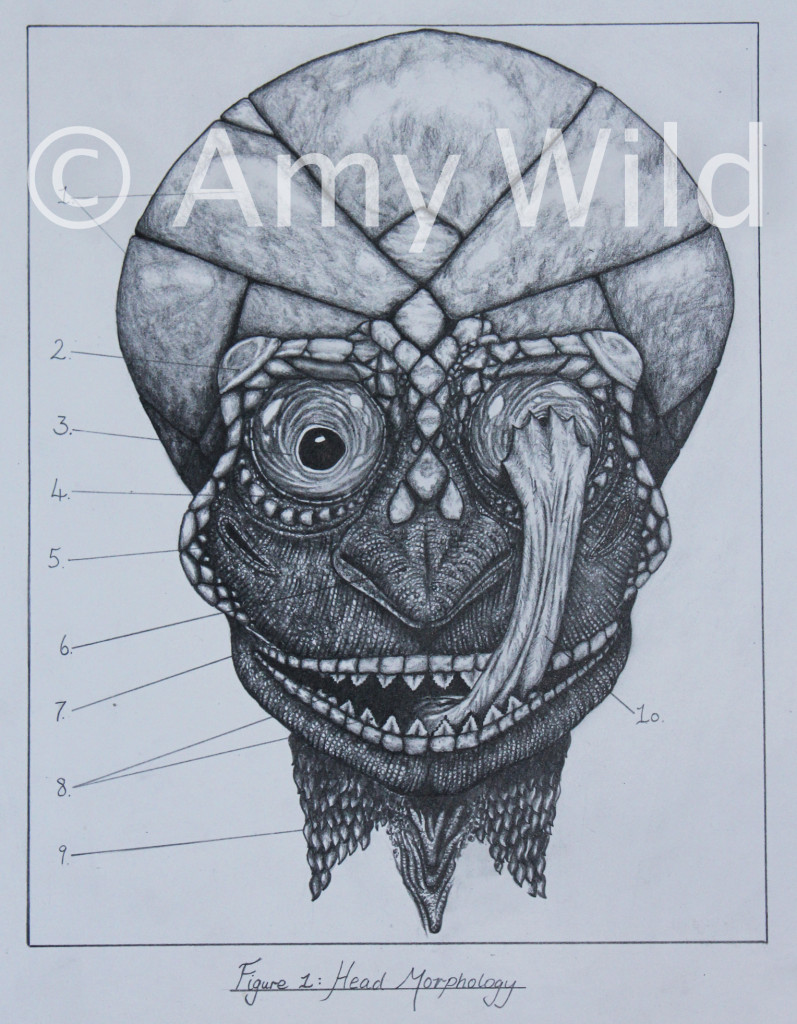 1. Surface of highly developed cranium is covered in large glossy black to purple slightly rugose scale plates, similar to many Earth lizard species of family Scincidae. Plate orientations do not closely parallel any earth species. Plates are likely adaptations for increased heat absorption and increased protection against predation. Cranial structure is similar to that of Humans. Encephalization quotient appears larger than any known Homo species, suggesting high intelligence. 2. Eye ridges are moderately prominent, lined with smaller moderately rugose scales. Potentially used for protection against dust storms and radiation. 3. Eyes are very large and forward facing. Irises are broad with bright yellow pigmentation, demonstrating convergent evolution with many Earth nocturnal mammals, suggesting a nocturnal habit in this species. Binocular vision suggests a predatory lifestyle. Eyelids are fixed, as in several Earth reptilian species. 4. Cheek slits. These are not known in any Earth species. They appear to act as a secondary pair of nostrils, and may promote multidirectional scent (tropotaxis), as well as implying an enlarged olfactory region. 6. Nose is convergent with Earth Camels. Broad nostrils capable of closing completely are adaptations to the high prevalence of windstorms and low temperatures on Mars. The olfactory sense again appears to be highly developed. 7. Mobile parts of the facial epidermis more sheltered from radiation are covered with very fine pebble-like scales similar to Earth varanid (Monitor) species. 8. Teeth are primarily short and triangular with serrated edges. Only one row was noted, however it is possible that the species bears multiple rows, as in the Earth Shark and Crocodile clades. A voucher specimen must be obtained to confirm either theory. It is thought that molar-like teeth were glimpsed toward the back of the individual’s mouth. These observations suggest a predator specialized in tearing flesh. Due to the potentially delicate nature of the teeth, it is possible this species specializes as a scavenger, feeding mostly on carrion. Molars may suggest a partly omnivorous diet, or merely a tendency toward chewing meat for more effective digestion. 9. Body scales are small and overlapping, uniformly black to purple. Each scale is convex, allowing air pockets to be stored between the skin and scale surface. Should the specimen be endothermic (warm-blooded), these would provide highly effective insulation, as in Earth bird feathers. The individual demonstrated the ability to lift and lower scales, also similar to a bird’s fluffing and flattening of feathers for temperature regulation. 10. There were two instances during the period of observation in which the Martian used its tongue to clean its eyes. This system reduces moisture loss c.f. eyelids. Tongue has multiple shallow forks. This is likely to provide directional chemical sensing (tropotaxis), similar to the effect of forked tongues in Earth snakes and varanids. 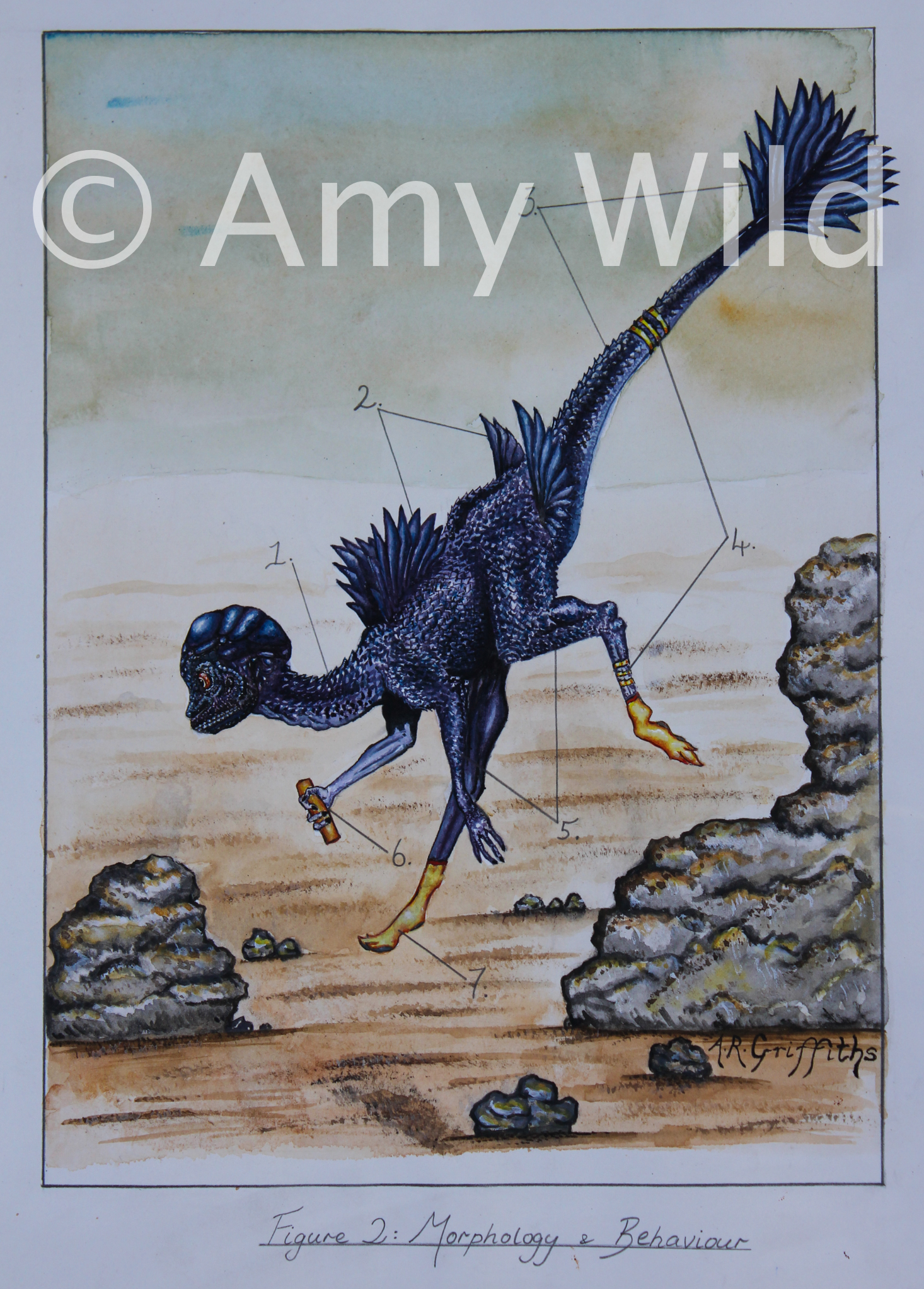 1. Birdlike neck is highly mobile. Upon retreating, a complex series of head shakes and bobs was noted. The individual retreated with head lowered. Head position is thus likely to be a large part of communication, similar to the Earth agamid (dragon lizard) family. 2. Paired dorsal and lateral ‘fans’. Appear to be modified scales. Perpendicular motion (e.g. vertical motion in dorsal fans) is inhibited, however fans are capable of folding and unfolding swiftly, similar to dorsal fins in fish. Flight is not possible, however the fans are heavily utilized during leaping and bounding. Likely adaptations to lower gravity, increasing stability and mobility especially during wind storms. 3. Tail is relatively well muscled and mobile, though primarily carried horizontally as in the prehistoric Earth Dromaeosaurs. Tail ends in a fan, horizontally aligned. This is utilized similarly to Earth bird tails, increasing balance and agility and controlling airborne descents (in leaping and bounding). 4. The tail and left leg each bore three bands, bright yellow in colour. Material is unknown. Such ornamentation suggests a strong social structure in the species. 5. Limbs are adapted to bipedal locomotion, very similar to prehistoric Earth Therapods. Elongate and lean. The individual was very speedy, and adept at leaping and bounding among boulder piles. On flat ground it adopted a mid-paced ‘jog’, though appeared capable of far greater speeds. 6. Hands each bore four elongate digits, including visible opposable thumbs. Nails, while pointed, were greatly reduced, similar in shape to Earth Human nails. An unidentified cylindrical object was borne in one hand. Such high dexterity, reduced adaptation to hunting, and purposeful carriage of a non-edible object again points to high intelligence and social structure. Manufacture of weapons is also possible. 7. Feet were clad in bright yellow material. This is clear evidence of civilized life.

Conclusion. This description represents a breakthrough in the perceived biology of Martian life and elicits speculation not only as to ecology and physiology of the species, but the evolutionary history of Martian biology as well as the possibility of sentient, civilized life on Mars. Parallels never suspected are now known to exist between life derived from Earth and that of Mars. Further study is required. An

expedition with the aim of obtaining a voucher specimen is strongly advised. This would permit the investigation of internal structure, including adaptations to the high CO2, zero Oxygen atmosphere, internal temperature regulation devices, skeletal system and brain anatomy. Eventually, investigation into social habits and the degree of civilization within this species must also be conducted. Such knowledge is likely to greatly benefit current efforts in human habitation on Mars. Further, providing a conventional DNA structure is present, genetic analyses may provide a starting point to the construction of a phylogeny for Martian, and ultimately unified Earth and Martian, vertebrate life.