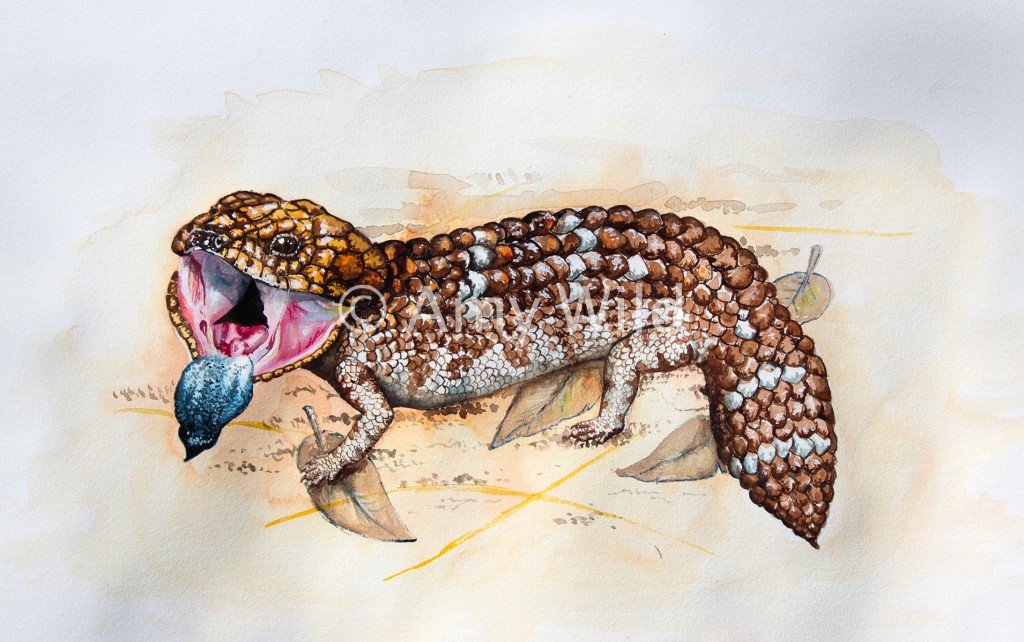 Here’s a lizard we from Australia have all seen, or at least heard of in some sense! The Bobtail Lizard (Tiliqua rugosa) lives throughout southern and eastern Australia, and in most of its regions is highly common. Here in the southwest, it is not unusual to have a local bobby in your back yard if you have even a small amount of greenery. Being such a charismatic and recognisable reptile, they have acquired the most common names of any Australian lizard! At least six are recognised in literature, and you can be sure there are more amongst locals! If you know them from other parts of the country, you might refer to this species as a Shingleback, Stumpy-tail, Sleepy Lizard, Pinecone Lizard or Boggi.

Yet for all these names, there is another one that is often falsely assigned! If you’re not a reptile person, and a big lizard turns around on you, opens wide its mouth and hisses at you, big blue tongue bared, it is understandable to assume that this is the Blue-tongue you’ve heard so much about. Blue-tongues’ tongues are a brighter blue than those of our bobtails. They’re also a much more ‘stock-standard’ skink – having smooth, glossy scales, a short but tapering tail and a longer, slimmer head. They are also much faster on their feet than Bobtails, and more inclined to flee than to stand their ground, as a Bobby almost invariably will! I’d also take a Blue-tongue bite over a Bobby’s any day. 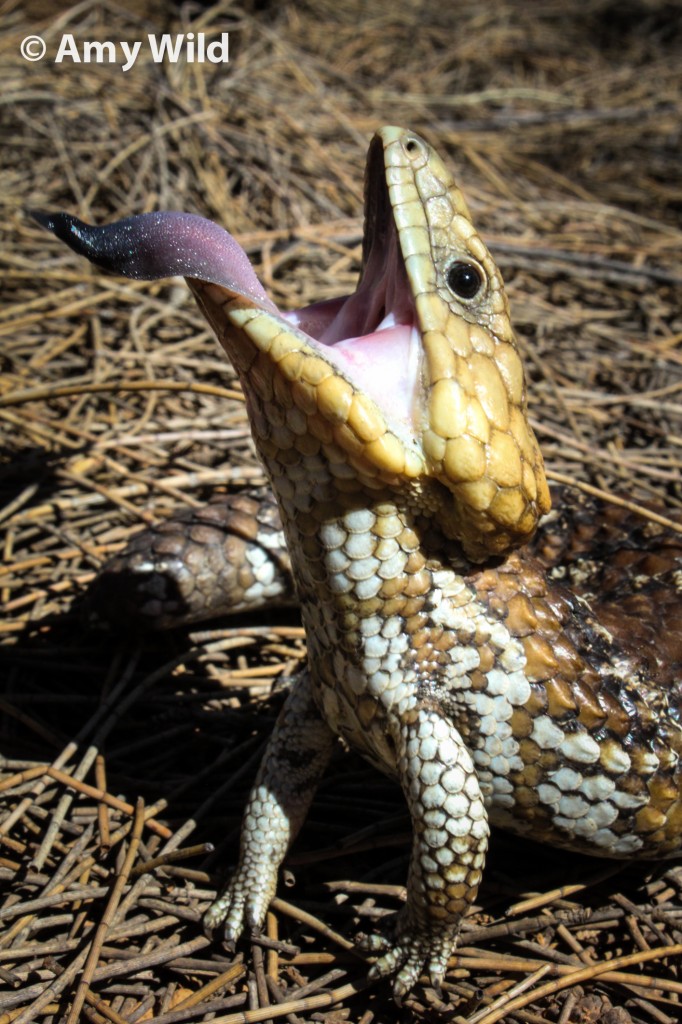 Perhaps the most unique feature of the Bobtail, next to the bobbed tail (shaped rather like its head to confuse predators) and dull blue tongue, are their very large, very rough, wrinkled (rugose) scales. No other lizard has such scales. It is thought that the key purpose of these is to increase heat absorption, as well as making them damn well camouflaged. The Bobtail is also unable to drop its tail (i.e. doesn’t have tail autonomy) like most skinks.

Interestingly though, Bobtails are, despite their differences, skinks; and very closely related to Blue-tongues. They are also a taxonomically diverse species, having four subspecies. These are primarily determined by the part of Australia that they inhabit; or perhaps you could say, the habitats and environmental conditions to be found there. Rottnest Island (WA) has its very own subspecies; Tiliqua rugosa konowi. Unfortunately these lizards are in trouble; they are classified as RARE or likely to become EXTINCT (Wilson and Swan, 2010).

So, why are Bobtails so widespread and largely common? Perhaps the same reason that they make such good pets! These reptiles will eat almost anything. Being omnivorous, their diet extends from insects and carrion to fungi, flowers, fruit and other plant parts. Strawberries are ever a favourite.

So if you find one and have a yummy bit of fruit to share, feel free, but watch your fingers! However, it is very important not to remove a Bobtail from his or her local habitat. These lizards are monogamous; though they separate for most of the year, they reunite each year between September and November to breed. Males will spend days following their female about until she is ready for business time. Finally, between December and April the female will give LIVE BIRTH. That is to say, she is viviparous, not oviparous (egg-laying) like most reptiles. She will have one to four young.

What an individual! But what I think I like most about them is… Their love of chin scratches. You guessed it – this is probably my favourite lizard.